WRCB ATLANTA (AP) – “The top federal prosecutor in northern Georgia and the state’s governor say the state and federal governments need to focus on helping former prisoners readjust to life outside prison.

U.S. Attorney Sally Yates and Gov. Nathan Deal spoke Wednesday at a summit on re-entry. They urged business leaders to give people who have been convicted of a felony a fair chance in the hiring process.

Yates said that simply prosecuting and jailing people is not going to make communities safer. She said effective prevention and re-entry measures are also needed.

Deal said the state has a moral and financial obligation to ensure that prisoners are better equipped and more skilled when they come out than when they were locked up.”

“Officer B solicits and receives oral sex from prisoners in exchange for gifts or new uniforms and underwear. He has a reputation for being aggressive and threatening, and one prisoner described him as a “sexual predator.” In 2012 and 2013, several women reported that he touches prisoners inappropriately, licks his lips at them, and watches them shower at the Tutwiler Annex.”

ThinkProgress – “For the past two decades, female inmates in Alabama’s Julia Tutwiler Prison for Women have been subjected to atrocious acts of sexual abuse – and the Alabama Department of Corrections (ADOC) did nothing about it.

A Department of Justice report has found that the state’s rampant abuse violates the U.S. Constitution’s prohibition against cruel and unusual punishment, and calls on Gov. Robert Bentley (R) to make immediate changes or face a lawsuit. 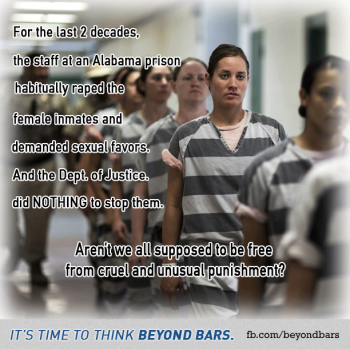 “Tutwiler has a history of unabated staff-on-prisoner sexual abuse and harassment,” the report said. “The women at Tutwiler universally fear for their safety. They live in a sexualized environment with repeated and open sexual behavior…”

…Unfortunately, these transgressions are not unique to Tutwiler. Inmates in three other Alabama prison are protesting against ADOC, in response to “not being paid for prison jobs, unsanitary conditions, overcrowding, sentencing and parole policies and other issues.” Another DOJ report found that sexual abuse in prisons nationwide rose 11 percent, between 2009 and 2011. Prisoners across the country are also denied health care and subjected to excessive force.” Full Story